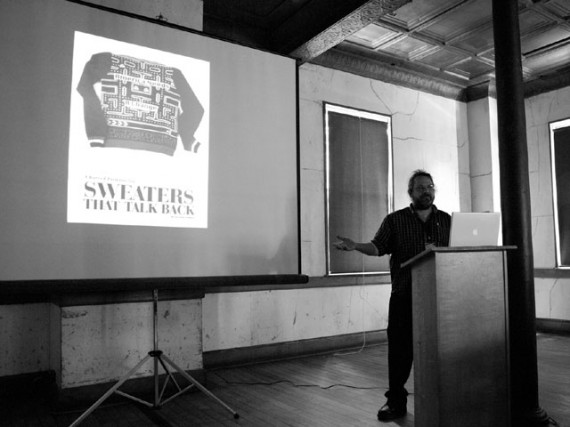 In this session five individuals employ the Pecha Kucha format to present markedly different approaches to the ever-evolving field of arts publishing. Tod Lippy is the editor of Esopus, a semiannual arts journal published in New York City with a purposefully eclectic, resolutely non-commercial focus; Anne Barlow, executive director at NYC’s Art in General, oversees that organization’s New Commissions publication and library exchange programs; Fairfax Dorn is the co-founder of Ballroom Marfa, an exhibition and performance space in Marfa, Texas, that also publishes artists’ editions, CDs, posters, and catalogs; Max Schumann is the associate director of Printed Matter, the world’s largest nonprofit organization dedicated to artists’ publications; and Peter J. Russo is editorial and program director for Triple Canopy, an online magazine, workspace, and platform for editorial and curatorial activities.

Tod Lippy, Editor of Esopus, described the magazine as a commercial free forum for artists. Founded in 2003, the magazine boasts 10,000 subscribers in forty-seven states and nineteen countries. Each issue contains three artists’ projects. The editors encourage artists to “think outside of the box” with regards to format, paper, and other technical matters. Some artists create discrete objects for the magazine, giving readers the opportunity to own a work of art. These artists’ projects are not introduced by explanatory or critical material, allowing the readers to appreciate them as they are. There are, however, critical texts in every issue, and fiction or poetry in most. There are also thematic CDs of new music in each issue.

Anne Barlow, Executive Director of the thirty-year-old Art in General, stated that there New Commissions project, founded in 2005, is the organizations core project. Each year Art in General commissions and publishes six original books, which are unique to the artists’ projects. These publications are supplemented with web-based content. Barlow expressed an interest in starting a book exchange distribution program to create greater distribution possibilities for these and similar artists’ projects.

Founded in 2003, Ballroom Marfa is tasked with the public exploration of art and culture, said Executive Director Fairfax Dorn. In addition to exhibitions, the organization publishes printed material including catalogues, monographs, and art and music posters. Artists helped design the catalogue Hello Meth Lab in the Sun, which they wanted to have the feel of a textbook. The book was picked up and distributed by Distributed Art Publishers. Four writers were commissioned to pen essays for the book, and in fact, with each exhibition catalogue Ballroom Marfa commissions writers to write essays.

Each issue of Triple Canopy, and online magazine, is curated like a group show, according to Editorial and Program Director Peter J. Russo. Russo described each issue as a four to six month collaboration between editors and contributors, many of whom have never made work for the web. Some projects are explicit adaptations of the traditional magazine format. Russo claimed that Triple Canopy is invested in the circulation of ideas from one medium to another—on and offline. This Fall they will release an anthology that documents each year of the organization since their founding in 2007. They will also be publishing a free broadsheet to be distributed in institutions, bridging the gap between print and digital.