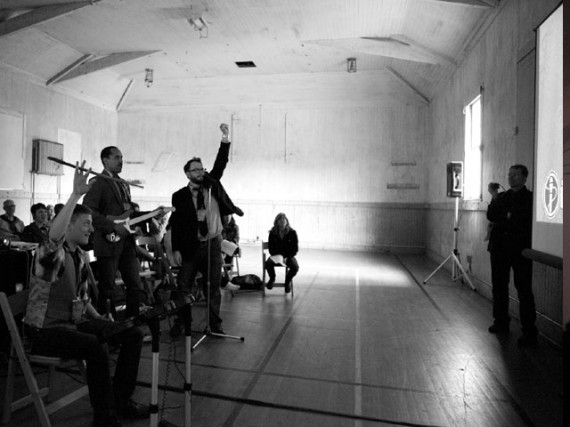 How do we work with communities? What are strategies to engage individuals and audiences, create meaning, and develop content and outcomes? We will provide working examples of community based models at the Watts House Project in Los Angeles and the Coleman Center for the Arts in York, Alabama. The session will consider how performance can be used to influence the way we relate to each other and ourselves. Bring your own ideas and questions for an open group discussion about practical and conceptual issues of working in a socially engaged process and expect to sing a song or two along the way.

The session was led by Edgar Arceneaux of Watts House Project and Shana Berger of the Coleman Center for the Arts. A case study written by Berger can be read here.

Edgar Arceneaux and Shana Berger open the session by introducing their organizations and both of which are driven by community collaborations within low income neighborhoods/locations.  Arceneaux is the Executive Director of Watts House Project, an artist led housing redevelopment project centered around the Watts Towers in Los Angeles. Shana Berger co-directs Coleman Center for the Arts in York, Alabama which facilitates artist and community partnerships for the purpose of social and civic engagement among York residents.

Both presenters have chosen to utilize music in this session as a means to illuminate effective community partnerships.  Music, they agree, provides a good analogy for what it takes to move beyond a singular vision and into a sense of unity.

For his portion of the presentation, Arcenaeux employs the social video game platform, Rock Band to solicit participation among those in attendance in order provide an immersive framework to illustrate successful collaboration. Arceneaux lists 3 parameters of contemporary video gaming strategy:

1)      Character construction through the breakdown of identity – One creates their avatar’s identity for Rock Band through permutations of various personalities/styles provided by the software.

After defining these parameters, Arceneuax asked the group to assist him in performing the Rolling Stone’s, Gimme Shelter.  James Bewley took on vocals and Scott Schofield backed them up on the drums. At first they struggled for unison. The challenge of working with multiple individuals, Arceneuax explained, is getting them to move in the same direction.  When eventually, the band members began to synchronize their efforts and find a common rhythm they was awarded a “Unison Bonus”.   Soon audience members began to join in providing back up vocals for the ensemble. However, due to a glitch in the console, the band only accomplished a 68% complete score.

Following the performance, Arcenauex recounted his introduction to Rock Band via PowerPoint presentation. He introduced his daughter Zora and identifies developmental milestones throughout her childhood such as when she began adopting cultural norms. He then references a quote by the philosopher Henry Bergson comparing this representation of growth to gaming platforms: “When using the concept of space to describe something without dimension (like the mind) you get a faulty picture”. This belief is also true within community partnerships because space/place is not an accurate measure of community.  Communities are negotiated through a network of complex and often overlapping relationships.

The central operating principle of Watts House Project is “Sweat Equity”.  Sweat Equity encourages partnerships through incentives that are mutually beneficial to all parties involved.  This is how WHP managed the engagement of “outsiders” who would otherwise be reluctant to engage with Watts residents.

After presenting a brief history of Watts from the railroad through the ’92 Riots, Arceneaux reiterates that “We want to describe communities as spatial when in reality, they are relational and intensive not extensive.”  WHP’s partners represent an amalgam of public and private interests and include organizations ranging from the Art Center Pasadena to St. Johns Methodist Church, the latter being the centerpiece of a community redesign project that included a new website, a public art/light installation, landscape re-design, and more. Those who engage in a collective physical effort such as landscaping are often able create a moment outside of social habits and expectations, by re-directing their attention towards a collective effort.

Once you change the role in which citizens relate to space a change in attitude towards civic responsibility follows.  Or, as Zora put it, “When you let the rhythm take you, the boundaries that separate fade away.”

While Shana Berger prepared for her presentation, Arceneaux took questions.

Q:  While most volunteers develop a deep connection and commitment to community practices over time, how do you entice people to volunteer in the first place?

An audience member added the observation that working in a physical capacity through group action often tears down notions of “otherness”. When a community is able to manifest results from an economy of means the sense of accomplishment inspires an equivalent sense of unity.

Q: How do you avoid the perception of a beautification exercise and establish trust among local residents weary of outsiders?

A:  Initially, people began moving near the Watt Towers Arts Center, because the center enjoyed 24 hour security which in turn made residents feel safe. Beyond the desire for a feeling of security, the conflict between historical redevelopment efforts and the civic ownership is what gives WHP agency.  By leveraging the skills sets of those already living within the community and recognizing them as the primary stakeholders, Watts is able to build capacity which in turn cultivates civic ownership. By making the project scaleable and reproducible other communities can adopt similar practices tailored to their own needs and goals.

Shana Berger began her presentation with a brief profile of York a town burdened by widespread poverty but fertile for art making.  Small town residents are hungry for social exchanges and embrace the opportunity to interact with artists and each other through culture.

The focus of Bergers presentation is the Coleman Center’s visiting artist, Samita Sinha and her “Community Sing” project. An extension of the poet and performance artist, Sekou Sendiata’s Dream State project, Sinha invokes traditional folk songs to activate dialogue and collective expression.  The first week of Sinha’s residency was spent getting to know York and the various socio-economic communities that co-exist there. During this time the artist introduced herself both personally and creatively to York residents through workshops at churches, after school programs, community centers, etc. where.

“Community Sings” begin with warm-up exercises to allow the participants to get comfortable with one another and with their voices.  There are three exercises:

2)      Each individual holds a distinct note at the same time

3)      The individuals alternate between distinct notes and then to a shared note promoted from another participant.

The final manifestation of the project is the “Slow-Sing” wherein each member of the group selects unique song to sing. They repeat the last warm-up exercise described above while drawing each note out for the entire length of a breath. Throughout the song, melodies and tones converge in accord with the communal flow of breath.  The intended result of the exercise is to “blend the known and the unknown”. An audio sample of the process captured a beautiful moment when the distinct individual notes contributed to a greater harmony.  During one “Community Sing” participants performed an 8 minute rendition of “America the Beautiful”.  After singing “Amazing Grace”, various participants, moved by their personal and cultural association to the song, began to discuss spirituality and share stories of their own trials and transformations that the song had invoked for them. The activity demonstrated how personal transformation can lead to cultural transformation.

Sinha will return to York to develop a new composition for a “Community Sing” braided together from music sourced from both Black and White churches.

Following the presentation of Sinha’s work, Berger invited the sessions attendees to participate in a Community Sing lead Arceneaux and a WHP board member in addition to Berger and Coleman Board members, beginning with the three warm up exercises and culminating in a song.  The last exercise proved to be most difficult.  After being instructed to follow our own breath, the group eventually achieved a measured synchronization.

The floor is again opened to questions:

Q: Why did CAC choose to commission “Community Sing and impact did it have on York?

A:  In York, everybody sings and although the songs selected seem old and outdated to many of us, in York they remain relevant and therefore contemporary.  Sinha’s work was a natural fit. CAC’s programs respond to what York residents want.  York wanted a space to come together and CAC was formed out of this communal desire.  In addition to exhibitions and performance work, CAC also hosts a yearly potluck, a community garden and other social occasions proposed by Yorkers.

The conversation progressed toward the arts responsibility and commitment to social action.

Q: Do either organizations support or lead direct action against social ills? Has art for arts sake reached its potential for impact? Shouldn’t artists and arts organizations, be using creativity to tackle larger social change, beyond meaningful art experiences?

A: While the projects presented appear to be doing just that, Arceneaux defended artistic practice saying that “you can’t separate smell from taste”; in and of itself, artistic activity instrumentalizes social activism.

Q: How do you engage neighborhood participation within a community of indifference?

A:  Through mutual interest and incentive. For example Linux, the open source operating system, is an example of an extremely successful collaborative effort driven by volunteers and fueled almost entirely by self-interest. Linux satisfies the contributors desire for edification or and free access to knowledge that will help them trouble-shoot their own projects.  The lesson here being that incentive must be decentralized in order to be effective.

Arceneaux is bothered by the notion of artists “Going into communities” which sounds almost invasive, intrusive and condescending.  He relates a moment during his work at WHP when he watched three men pour concrete through rebar.  He interpreted the moment as a sort of choreography of the mundane. This daily occupational ritual informed Arceneaux’s artistic practice. He didn’t inject his practice into Watts, but instead, a relationship organically developed between Watts and his practice. Another audience member described this kind of exchange as “Selfish-Selflessness”.

Q: In regards to CAC’s Community Sing project, what motivated the decision to incorporate performance arts into visual arts programming? How do artists accustomed to working within spatial parameters translate their work into durational form and what does it mean when an artist transition in this way?

A: For CAC social activism is about changing relationships and art is a vehicle for this type of change. Arceneaux self-consciously added the age-old cliche “Art can be anything”.  Socially engaged artwork is not about changing people into artists.  It is about exploring/recognizing the creative process as an instrument of social change.

Following this conversation, one of the attendees cited Arceneaux’s use of RockBand as a way to connect to young audiences through a shared language.  Why not adopt the language of the communities being served? To get people involved, why not put the carrot in front of the horse?  Scott Shofield of Out North in Anchorage Alaska shared their organizations success developing Youth programming by this means. The organization began to host Rock Band Karaoke every Friday night. This fun and easy pilot program attracted hoards of teenagers.  In turn these kids began to propose their own programs for Out North including exhibitions and music performance.  At a different organization, students have gotten wise to economic justice and have demanded payment for the work produced through the organization, much like senior artists receive, as an artist fee. This measure toward equity is another example of art as an instrument of change through community partnership. 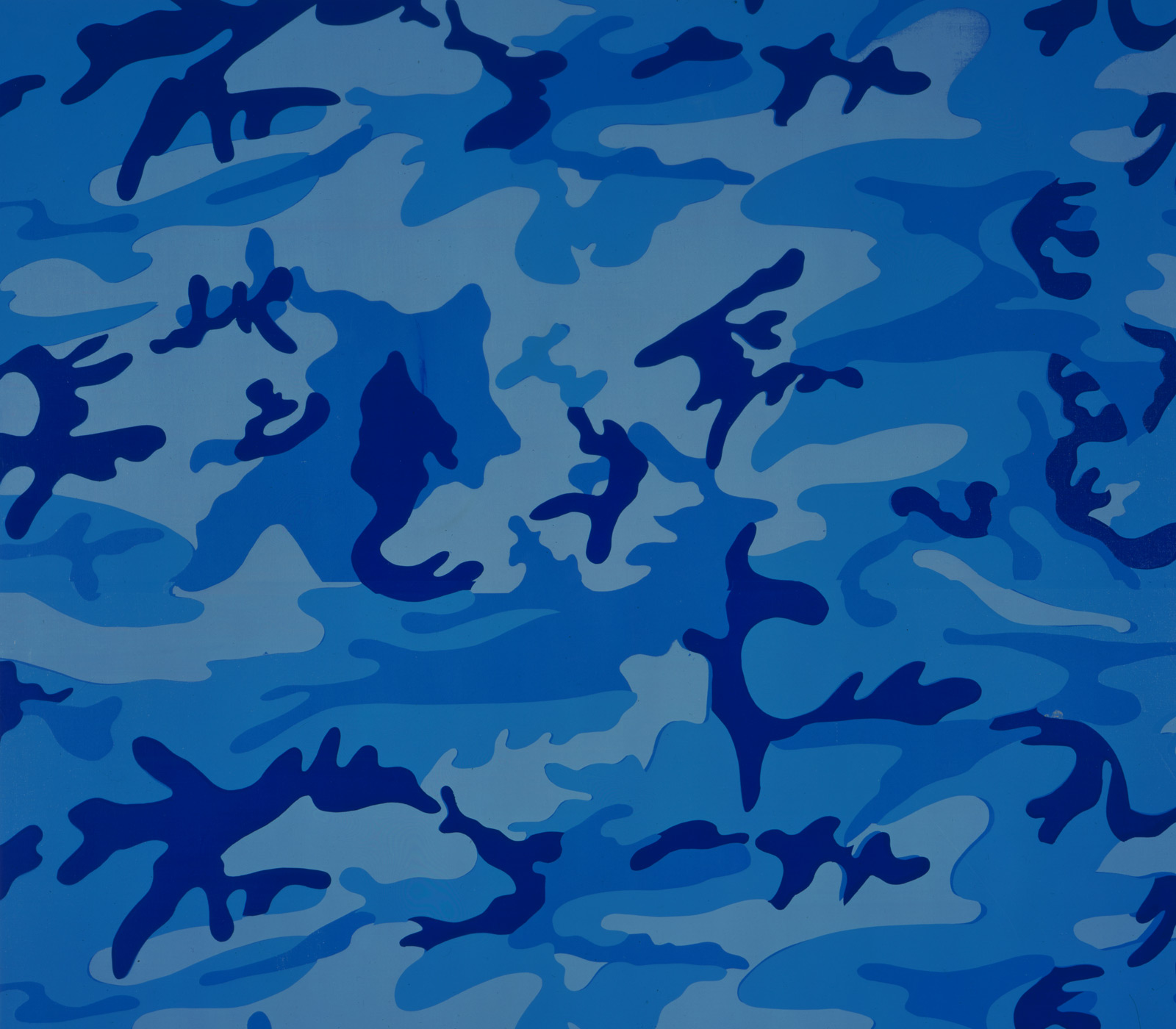